Alcohol is the most commonly used substance among youth in the United States, more than tobacco and illicit drugs. Alcohol is responsible for more than 4,300 annual deaths among the underage youth. On average, underage drinkers consume more per drinking occasion than adult drinkers. More than 90% of this alcohol is consumed while binge drinking. People aged 12 to 20 years drink 11% of all alcohol consumed in the United States. In 2010, there were approximately 189,000 emergency room visits by persons under the age 21 for injuries and other conditions linked to alcohol.

The 2013 Youth Risk Behavior Survey found among high school students, during the past 30 days that 35% drank some amount of alcohol, 21% binge drank, 10% drove after drinking alcohol, 22% rode with a driver who had been drinking alcohol. Underage drinking  has been linked to health and safety risks, such as engaging in risky behavior, DUI, engaging in unprotected sex, increase the risk of physical and sexual assault, may interfere with brain development and can lead to school and work problems. 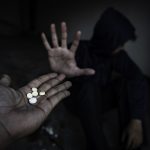